Despite consumer prices falling by 0.1 per cent in April, headline inflation remained above the Reserve Bank of Australia’s 2-3% target band at 3.4%, according to the Melbourne Institute’s Monthly Inflation Gauge.

The fall in headline inflation for April is largely associated with a recent decline in fuel prices, which surged in February and March. In contrast, housing-related costs continued to rise in April.

In terms of the trimmed mean measure (which trims away extreme changes such as those associated with recent fuel prices), annual inflation reached 2.6% in April and is therefore close to the top end of the Reserve Bank’s 2-3% target band.

“Although inflation will remain elevated in the short term, the inflationary effects of such temporary factors will likely moderate in coming quarters, even without aggressive monetary policy. Nevertheless, higher interest rates will speed up the rate at which inflation moderates.” 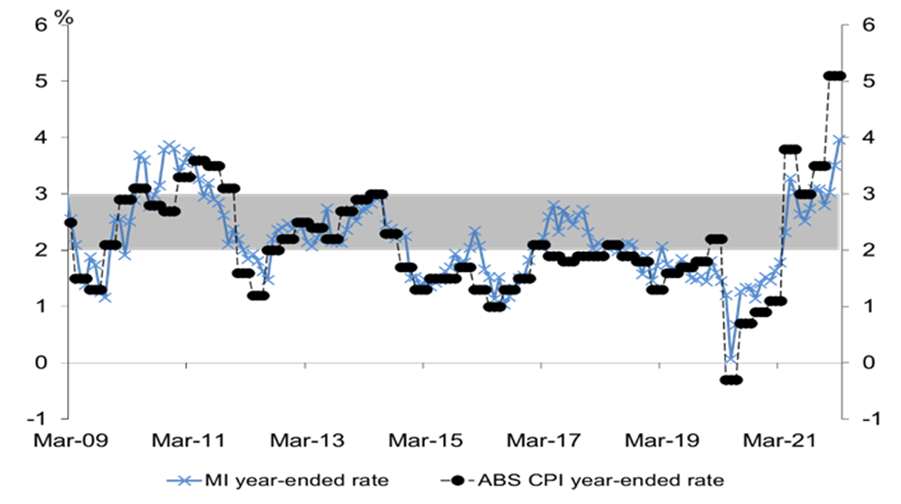 The Melbourne Institute Monthly Inflation Gauge Report estimates month-to-month price movements for a wide range of goods and services across the capital cities of Australia using Australian Bureau of Statistics’ methodology for calculating the quarterly consumer price index. It aims to provide financial markets and policymakers with regular updates on trends in inflation.

The Melbourne Institute Monthly Inflation Gauge report for May 2022 was released at 11am (AEST), Monday 2 May 2022. The report is only available to subscribers.

The Melbourne Institute Monthly Inflation Gauge is designed to give markets and policy makers a monthly update on inflation trends. Further information can be found here.